Despite spending most of their football history divided into three teams, Germany won the World Cup on four different occasions and euro three times. Efficiency has always been known for having strong teams, Efficiency has become its second name over the years.

From Gerd Muller to Thomas Muller, Germany has produced many football legends over the years and has boasted one of the most feared teams of all time winning the Euro in 1972 and the World Cup in 1974 and becoming the first team to become European as well as world champions at the same time.

With the start of the Euro Championship, let’s take a look at the history, culture and development of German football.

The start of German football

Germany officially formed their first national team in 1901 who played their first official match in 1908 against Switzerland in Basel and lost 5-3.

The German national team in its first international match in 1908. Image source –

The team, at the time, was chosen by the German Football Association until they appointed the first manager of the German national team in 1926. Otto Neers, their first manager, was a school teacher who led Germany to their first World Cup and finished third in the competition.

After World War II, political fallout prevented any German team from participating in any international sporting events. He missed the 1950 World Cup in Brazil.

Die Mannschaft, or the team, had a turbulent journey throughout the 20th century due to its politics and leadership. But the team continued to succeed despite constant wars, divisions, annexations and re-mapping.

After World War II, Germany and their soccer team were divided into three new states called West Germany, East Germany and Saarland. The three teams played separately in all competitions and West Germany was the most successful among them, winning the World Cup twice and the Euro twice including the fantastic 1954 World Cup.

The third part in our work #world Cup rewind

The Miracle of Bern – one of the greatest surprises in football history and the first star of West Germany ⭐# Demenshaft pic.twitter.com/CiZoTsAZ46

In 1990, after the fall of the Berlin Wall, Germany reunited and so did the football teams. Reunified Die Mannschaft played his first international tournament in the form of Euro 1992 and finished second. But they didn’t sit still long and finally won the next opportunity available in England at Euro 1996. It was Germany’s first European Championship victory since it was won by West Germany’s golden generation in 1980.

Germany won the 2014 World Cup, and their most recent international success came at the 2017 FIFA Confederations Cup.

German football has always relied on the work rate and efficiency of players, and despite the tactical revolutions, this has remained the core of football. German footballers are strong and in control, and may not be very skilled at handling the ball, but they are technically strong.

Earlier, they used to play in a 3-5-2 formation, with future coach Franz Beckenbauer as the team captain and sweeping attacker. Their style was more pragmatic at the time, waiting for the opponent to make a mistake. The two wings in the middle had to run up and down the field to maintain defensive solidity as well as provide an option to attack.

This system brought them great success in the 1970s, both internationally and in club football. The German national team and Bundesliga clubs have dominated the continent for the entire decade.

The development in German football came in the early 2000s, which first saw the use of zone defense and the intense pressure for which they are famous. Ralf Rangnick, among other coaches, brought this style of play to German football which was later adapted to the national team under Rudi Voeller, Jürgen Klinsmann and finally Joachim Löw. The influx of young players with an attacking mind became a turning point for Germany after the failure of the 2004 European Championship. It began to show results, but the team was still in the building phase when it finished third in the 2006 World Cup and second in the European Championship. 2008.

On this day in 2006, #ger beats #ARG 4-2 on penalties in Berlin to reach the semi-finals of #world Cup. #on your side pic.twitter.com/sf6ld0Wqtc

Loew has created a core team that can serve Germany for many years to come. The team formed around the likes of Miroslav Klose and Bastian Schweinsteiger, along with talented players like Toni Kroos and Mesut Ozil, finally led Germany to winning the World Cup in 2014, their fourth-ever World Cup Final.

Germany had the best decade in football history between 1970 and 1980 as they dominated European and world football, reaching the late stages of every tournament they participated in.

The team consisted of some of the biggest stars of their generation in every position. Led by Franz Beckenbauer, the team also included the likes of Paul Breitner, Rainer Bonhoff, Gerd Muller and Jupp Heynckes and was joined by Lothar Matthaus and Karl-Heinz Rummenigge in the late 1970s. Most of the players during that period were starring for the big Bundesliga clubs such as Bayern Munich, Borussia Dortmund, FB Stuttgart and Borussia Moenchengladbach. 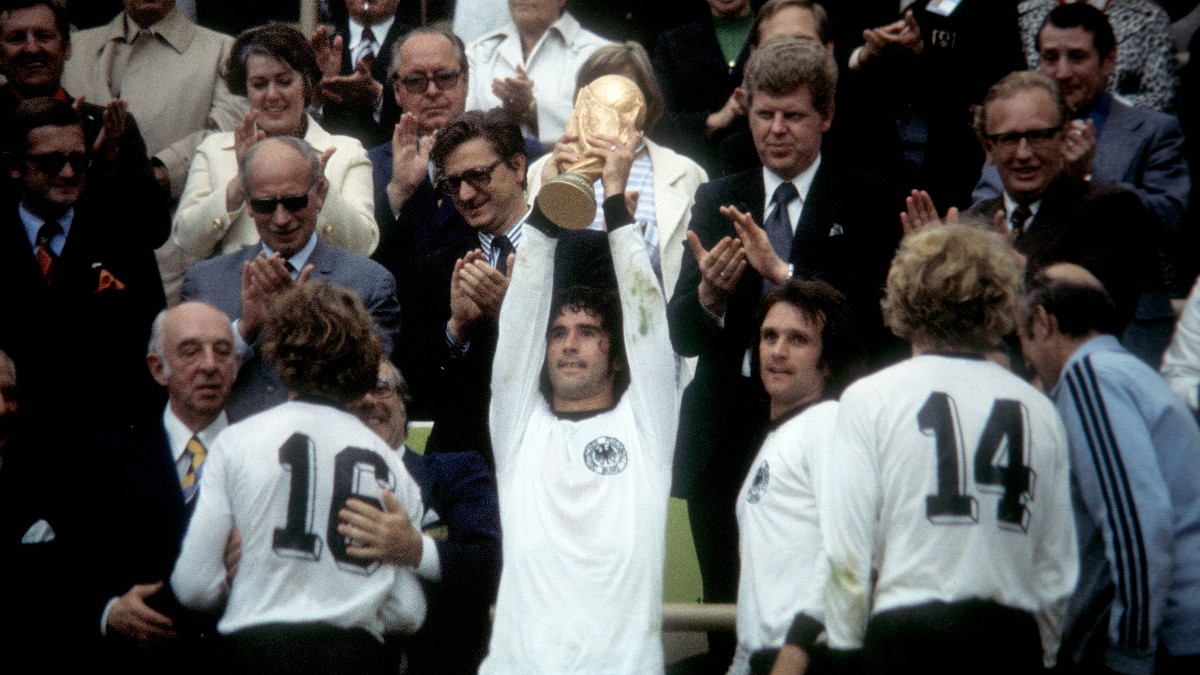 The Germans finished third in the 1970 World Cup and built on it. Under legendary manager Helmut Schön, Germany reached three consecutive finals at the Euros, winning twice in 1972 and 1980 while also becoming world champions in 1974.

After the weakening of Euro 2004, the German Football Association (DFB) decided to change its manager Rudi Voller, who also took the team to the 2002 World Cup final and hired his former German teammate Jürgen Klinsmann. It also did not give the desired results, and after taking third place in the 2006 World Cup, Germany replaced Klinsmann with Joachim Loew as their new manager.

Loew took charge of a young team, with future stars such as Philipp Lahm, Lukas Podolski, Bastian Schweinsteiger and Mario Gomez alongside some veteran players such as Jans Lehmann, Michael Ballack and Miroslav Klose and took them to second place at Euro 2008.

The national team was showing great progress under Loew while playing the famous German”CounterWhich translates to counterpressing. A tactic established in Germany that helps you recover the ball inside the opponents half with the help of stifling pressure. They later finished third in the 2010 World Cup, when they lost the semi-finals to eventual winners Spain. Germany under Loew looked like a team Almost needs a little creativity in midfield to take off on the big stage.

#On this day In 2010 a certain duo debuted for # Demenshaft against Argentina.

We lost that match 1-0, but we made up for it after a few years 😉 🇩🇪 hahahaha Tweet embed pic.twitter.com/3aTks1Rmnw

Loew found what was lacking in future Real Madrid stars Toni Kroos and Mesut Ozil alongside trusted defensive midfielder Sami Khedira. This new group of players formed the core of the German midfield for years to come, and alongside Joachim Loew, they led Germany to victory in the World Cup in 2014.

Loew revolutionized a German team that had become almost unplayable. It was shown in the 2014 World Cup semi-finals when Germany crushed Brazil 7-1 and shocked everyone.

Become Jogi, as fans fondly call him Longest serving manager in Germany In history I will lead them to Euro 2020. It’s been out of shape since the glory of 2014 and the system looks rusty and bare. Germany had one of the worst title defenses at the 2018 World Cup and were knocked out in the group stage by South Korea, Sweden and Mexico.

In March 2021, Loew announced that he would resign after Euro 2020 and the German Football Association decided to hand Mannschaft to his former assistant and triple-winner Bayern Munich coach Hans-Dieter Flick.

What awaits us in the future

At Euro 2020, Germany will meet defending champions Portugal along with world champions France. It is described as the infamous “group of death” with Hungary as the underdog and the fourth member of the group. Germany’s chances of reaching the late stages are still great, even if it takes third place in its group. But in order to make more progress in the tournament, they will need the best performance from their best players.

Preparation? I completed it ✅

Thomas Muller and Mats Hummels, who were expelled from the national team after the 2018 World Cup, have been called up to the squad for Love’s Farewell Tournament. Other key players include Toni Kroos, Ilkay Gundogan and Manuel Neuer.

There has been an influx of young and talented players into the team, similar to when Loew first took charge in 2006. With Champions League winners Kai Havertz and Timo Werner and strong wingers such as Serge Gnabry and Leroy Sane alongside the ubiquitous Joshua Kimmich in line In the middle, Germany looks like a strong and improved team in the European Championship 2020. They recently defeated Latvia 7-1 in their last pre-tournament friendly.

Loew hopes to leave the national team with a mark and has the means at his disposal, how he ends up using them is solely up to him.

Hudson-Odoi: Ghana coach Orako gets an update on the chase for Chelsea stars

Spain and Sweden UEFA EURO 2020 preview: Where to watch, team...

3 Teams That Could Sign Gary Trent Jr. on the...

Ravichandran Ashwin quit cricket for 6 months to save him from...

Spain and Sweden UEFA EURO 2020 preview: Where to watch, team...